Leading civil rights groups are accusing a Michigan real estate firm that bought and resold dilapidated houses in the state of misleading mostly low-income homebuyers about the properties’ condition. In a class-action lawsuit filed this week, lawyers for the NAACP and American Civil Liberties Union allege that Vision Property Management violated fair […]

Leading civil rights groups are accusing a Michigan real estate firm that bought and resold dilapidated houses in the state of misleading mostly low-income homebuyers about the properties’ condition.

In a class-action lawsuit filed this week, lawyers for the NAACP and American Civil Liberties Union allege that Vision Property Management violated fair housing, consumer protection and civil rights laws, claiming that the firm targeted people “who had been unable to obtain the dream of homeownership.” The houses Vision purchased are in predominantly Black neighborhoods in Detroit, Flint and Inkster.

More specifically, the suit alleges that Vision misled potential homebuyers into believing they could purchase a home through a seven-year contract when in reality the company was ensnaring them in 20- to 30-year payment plans. As a result, the plaintiffs’ lawyers argue, some homebuyers were shocked to discover that the payments they had been making for years were only for interest and hadn’t made a dent in the principal balance.

“Some homebuyers recalled being told that, after 84 payments, the house would be theirs and that they would have the deed to the property free and clear after seven years,” the ACLU said in court documents. “Others recalled that Vision’s sales pitch made them believe their full monthly payment was going toward the purchase price and that they would have finished paying for the home by the seven-year mark.”

Efforts to contact a spokesperson at Vision were unsuccessful. FTE Networks, a New York-based real estate investment company, bought Vision last December. FTE Networks did not respond to a request for comment.

The suit said many homes Vision sold had “torn-out electrical wiring, missing or non-functioning appliances, missing or damaged plumbing, missing toilets” and other problems — defects that allegedly were kept hidden from homebuyers.

“Some homes have floors that are collapsing or roofs that leak badly,” the ACLU said. “Many have raw sewage backing up in the home because of plumbing lines in need of a significant overhaul.”

Vision’s business practices drew national attention four years ago when a Baltimore family suffered lead poisoning while living in a house owned by the firm. The following year, the late U.S. House Rep. Elijah Cummings pushed for an investigation and asked Vision how many other homes it owned in Baltimore. A subsequent probe found that Vision had bought thousands of foreclosed homes from Fannie Mae.

The company later settled for $600,000 and gave deeds to the families living in the Vision-owned homes. Vision also has settled fair housing lawsuits against accusers in Ohio and Wisconsin as well.

Sat Oct 3 , 2020
(Bloomberg) — New York City restaurants are banking on expanded outdoor dining to survive the winter. But good luck finding a heat lamp. The heaters, pivotal equipment as bars and restaurants try to extend al fresco dining, are in short supply. A rush of orders and shipping delays from China […] 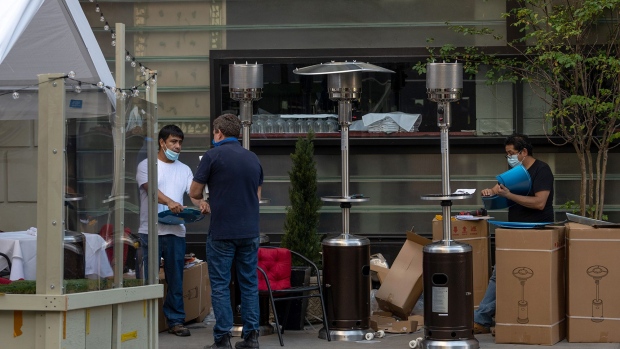