Commercial properties hit by the economic effects of coronavirus could have lost as much as one-quarter of their value or more, laying bare the scale of the damage being wrought across American malls, hotels and other commercial buildings. Evidence emerging in the commercial mortgage-backed securities (CMBS) market from recent appraisals […]

Commercial properties hit by the economic effects of coronavirus could have lost as much as one-quarter of their value or more, laying bare the scale of the damage being wrought across American malls, hotels and other commercial buildings.

Properties that have gotten into trouble are being written down by 27 per cent on average, data from Wells Fargo shows. New appraisals are triggered when a commercial property owner starts to have trouble paying the mortgage, and the loan is handed to a “special servicer” that could eventually seize the property on behalf of CMBS holders.

“It’s a big number,” said Lea Overby, an analyst at Wells Fargo. “This is material.” 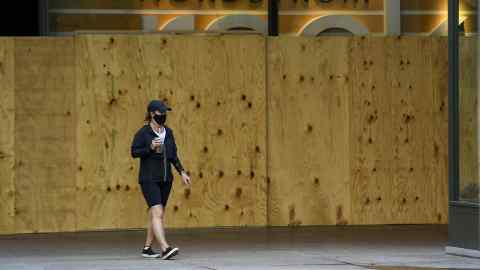 Recent examples show hotels being especially hard hit, given the collapse in tourism and business travel. A Crowne Plaza hotel in Houston was valued at $25.9m this month, down 46 per cent from when it was bundled into a CMBS deal in 2014. The hotel, which sits just off the Katy Freeway has not paid its mortgage since March and was transferred to the special servicer in May.

The Holiday Inn La Mirada, about 20 minutes drive from the centre of Los Angeles, was recently valued at $22.1m, down 27 per cent since it was securitised in 2015, having not paid its mortgage since April. Another Holiday Inn in Columbia, Tennessee, had its appraised value cut by 37 per cent this month to $7.7m.

“The numbers themselves are atrocious,” said Gunter Seeger, a fixed income portfolio manager at PineBridge Investments. “A 30 per cent markdown in appraisals pretty much across the board is horrific.”

The number of new appraisals is accelerating. The Wells Fargo analysis covers 116 struggling properties bundled into CMBS that have had new appraisals since April 1 — 68 of them this month.

Of the total, 75 of the mortgages were backed by hotels while 26 were retail properties, whose tenants have been struggling under lockdown-enforced closures and economic weakness.

Banks have been raising provisions to cover potential real estate losses this year, and the number of commercial real estate loans in US bank portfolios that were flagged as being potentially problematic spiked in the second quarter.

Meanwhile, CMBS investors have been keeping an eagle eye on appraisal values to gauge their risk of losses. Over the past four years, the average loan-to-value ratio on mortgages bundled into CMBS has been below 60 per cent, giving investors a sizeable cushion, even if a property has to be seized and sold for the loan to be repaid.

Coronavirus has substantially eroded that cushion, however, and loan-to-value ratio in the average multi-property CMBS is now almost 90 per cent.

“The longer this crisis goes on, we will move into a valuation problem,” said James Shevlin, president of special servicer CW Capital. “It absolutely concerns us but right now I still think we are covered.”

New appraisals are an early step taken by special servicers and help them assess how much time to offer borrowers to resolve their difficulties before they start foreclosure proceedings.

Special servicers and analysts said that it can be challenging to accurately appraise a property in the current environment. The potential sale value over the next few months could be heavily affected by another uptick in coronavirus cases, more stringent rules governing travel and people’s ability to go outside, or even a volatile presidential election. Equally, property values could appreciate if the economic recovery gathers speed.

“It’s someone’s best estimate of value,” said Alan Todd, an analyst at Bank of America. “Right now there is so much uncertainty. There could be a very high margin of error.”

Mon Sep 28 , 2020
Home improvement projects have a way of increasing in priority when you’re always in the house. The leaky kitchen faucet never really bothered you until you had to turn your kitchen table into a desk, forcing you to listen to the dribble. All. Day. Long. Or maybe you discovered your […]