A few minutes into an episode of “Dream Home Makeover,” a home improvement series premiering on Netflix on Oct. 16, an anxious homeowner frets about a minor flaw in the family-room fireplace, an asymmetry that the wife describes as “pretty dramatic.” If you’ve watched enough home improvement television, you know […]

A few minutes into an episode of “Dream Home Makeover,” a home improvement series premiering on Netflix on Oct. 16, an anxious homeowner frets about a minor flaw in the family-room fireplace, an asymmetry that the wife describes as “pretty dramatic.”

If you’ve watched enough home improvement television, you know this scene is meant to cue the eye rolls. But Shea McGee, the show’s perky co-star and the creative force behind the Salt Lake City design firm Studio McGee, cheerfully downplays the issue, promising the couple that the half-inch error will fade into the background once their grand 7,900-square-foot home is complete.

Her down-to-earth approach soothes her clients’ nerves, but also threads a needle for Netflix, which has decided that the salve homebound Americans need right now is an escapist lineup of shows about how to make the homes we can’t escape look prettier. In recent months, the network has rolled out a handful of new home improvement shows to a viewership that is looking for ways to spruce up their spaces, but also ambivalent about celebrating other people’s good fortune.

Over the summer, Netflix aired “Million Dollar Beach House,” a series that followed a team of high-end real estate brokers in the Hamptons as they tried to sell mansions to millionaires. But what was intended to be an East Coast alternative to “Selling Sunset,” the popular, brash series about Los Angeles brokers, was a flop. The show lacked the Botox and catty drama that made “Selling Sunset” a delicious hate watch. Instead, the show was skewered on social media by viewers who were outraged that the only Black broker on the show endured a series of racist microaggressions at a moment when Americans were laser focused on racial justice. Netflix has not announced a second season for the show.

In September, Netflix aired “Get Organized with the Home Edit,” a bubbly follow-up to “Tidying Up with Marie Kondo,” which was a huge hit when it aired in 2019. The new show, starring the organizing duo Clea Shearer and Joanna Teplin, features a celebrity in every episode. Sure, we could all use a little inspiration for how to color code our bookshelves. But at a time when millions of American homeowners have mortgages in forbearance, it may be hard to relate to the struggles of Reese Witherspoon, who wants to turn an entirely empty walk-in closet into a private showroom for her red carpet dresses and movie memorabilia.

So how does “Dream Home Makeover” persuade viewers to see a 7,900-square-foot marvel as a source of inspiration and not blind rage? You have to love the messenger. With Ms. McGee playing the part of the best-friend-next-door and her husband, Syd McGee, as her lovable sidekick, the show leans heavily on the Studio McGee brand: light and contemporary, with a finished product that is as approachable as it is Instagrammable.

“I want to provide a bright spot in people’s days,” said Ms. McGee, 35, during a telephone interview with her and Mr. McGee, 36, from the couple’s home in Utah. “There’s a lot going on right now and I hope that people can find a source of happiness.”

In what feels like an effort to read the room, the show mixes in relatable projects, like the renovation of a basement home theater in a small house. As part of the $30,000 one-room makeover, Ms. McGee builds a storage system for the mountain of DVDs piled on the floor. Another client is so overwhelmed by the way Ms. McGee transforms her modest family room that, through tears, she awkwardly lunges across the room to give the designer a kiss.

“Dream Home Makeover” is the latest step in a meteoric climb for the McGees, who started Studio McGee five years ago after Ms. McGee, who worked in public relations at the time, chronicled the design of her own Los Angeles home on Instagram, amassing a following so large that she decided to turn a hobby into a profession. (Ms. McGee has a degree in communications, not interior design.) Mr. McGee is the chief executive of their growing business. The couple now have an online home furnishings business, McGee and Co., a merchandise line with Target, and a book, “Make Life Beautiful,” to be released Oct. 27. The second season of “Dream Home Makeover” will arrive in 2021.

To start their business, the couple moved from Los Angeles to Utah five years ago, selling their home and most of their belongings. Studio McGee now designs homes in Utah and around the country, tackling a range of styles, like a Tudor in Denver, a midcentury modern rehab in the hills of Los Angeles and a modern home in Rye, N.Y. The company also continues to design small, one-room projects with modest budgets.

With 1.3 million followers on Instagram and 235,000 on YouTube, Studio McGee is the latest social media darling to land a television series. “The Home Edit,” with 4 million Instagram followers, was already a major influencer when its show aired. And Ben and Erin Napier, a design and construction duo, were plucked from Instagram to start “Home Town,” an HGTV home improvement show that announced its fifth season in May. In this model of reality TV, the stardom (and the audience) precedes the show.

“Shea was able to understand what was needed to make her audience react and to grow,” Mr. McGee told me. “She was an early adapter to Instagram. We would constantly talk about what we need to do. What do we need to change? Can we test, test, test the pictures? What is getting engagement? What is not? That really resulted in people responding to her.”

Over six 30-minute episodes, “Dream Home Makeover” also chronicles the personal and professional lives of the McGees in an upbeat tone that feels like an extension of their YouTube videos: short, polished clips that often focus on the build out and design of their 5,000-square-foot family home, which they completed a year ago.

Their social media brand stays on message too, with photos of a family dressed as impeccably as the homes are staged. The casual banter between the couple — lots of knowing sighs from Ms. McGee, plenty of corny jokes from Mr. McGee — builds on the image.

On “Dream Home Makeover,” the couple’s two daughters, Wren, now 7, and Ivy, now 4, appear regularly, filling in a picture of the young working family juggling tumbling lessons with client meetings and trips to the office to huddle with members of their 90-person staff. The narrative almost screams, “See? They’re just like you! It’s not all glamour!” In one episode, the McGees have a picnic lunch on the kitchen floor of their unfinished home, tasting toddler snacks one minute and talking kitchen island colors the next.

As Ms. McGee puts the finishing touches on the family home, agonizing over how to stack books and knickknacks on the built-in shelves, she offers decorating advice about how to layer colors, textures and fabrics.

“The point is to make it look easy and feel good,” she tells the viewer. And, for a fleeting moment, you’re left with the confidence that you, too, could design a home with a sofa so pretty and cozy that you could stretch out on it long enough to forget about the rest of your life.

Mon Oct 12 , 2020
SAN JOSE, — Two people were in critical condition Monday after being injured when a man drove his SUV into an outdoor dining area, hitting a pedestrian and several diners in Northern California, authorities said. Eight people were taken to the hospital with injuries described as major to minor after […] 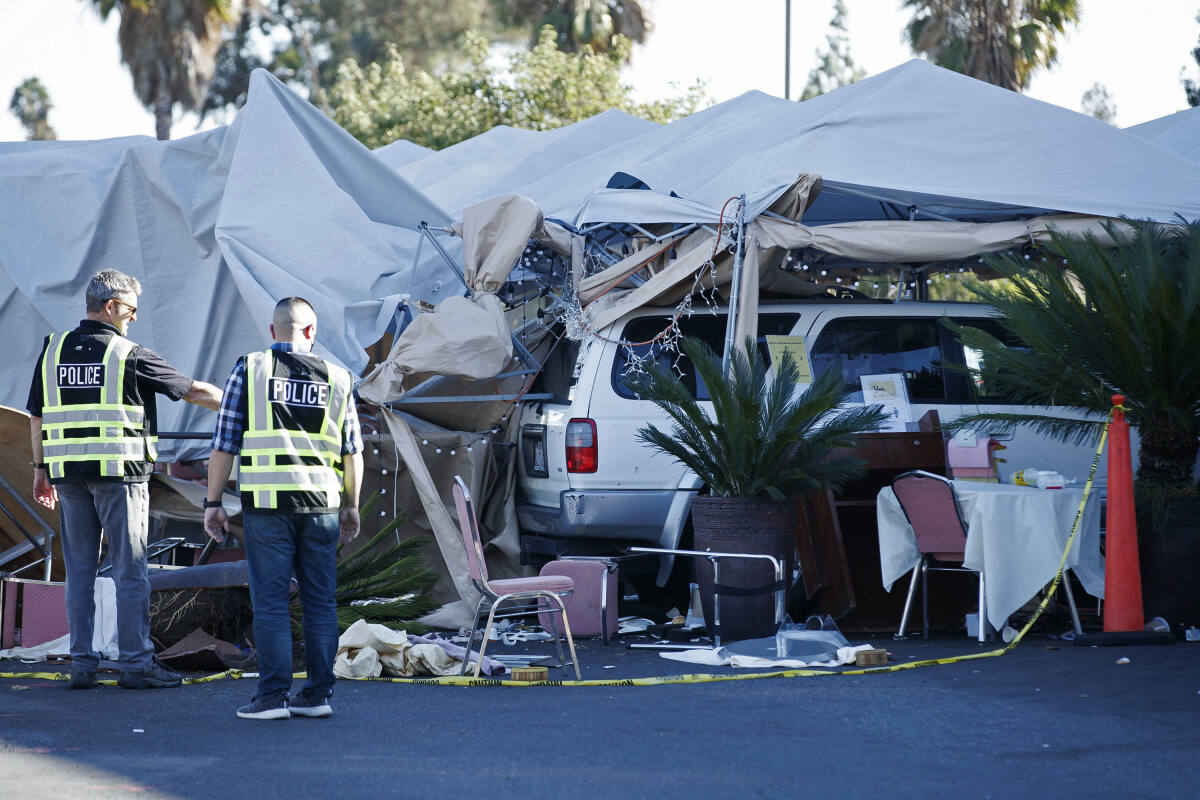