Mayor Bill de Blasio’s latest chess move in the tense battle over in-person education in New York City was to unveil a surprise plan this week for outdoor learning in public, private and charter schools. “Parents have asked about it. Educators have asked about it,” de Blasio said during a […]

Mayor Bill de Blasio’s latest chess move in the tense battle over in-person education in New York City was to unveil a surprise plan this week for outdoor learning in public, private and charter schools.

“Parents have asked about it. Educators have asked about it,” de Blasio said during a news conference Monday. “Outdoors is one of the things that works,” de Blasio added, noting that Italy, Norway and Denmark have implemented outdoor learning effectively. “The disease doesn’t spread the same way outdoors. We’ve seen that over and over.”

Dr. Anthony Fauci, head of the National Institute of Allergy and Infectious Diseases, has previously said that schools should offer as many outdoor options as possible for classes, recess and lunch. In addition to lowering the risk of coronavirus transmission, studies show that outdoor learning can be beneficial for students with cognitive and behavioral disabilities.

There’s a historical precedent for outdoor learning in New York in response to contagious disease outbreaks. During a major tuberculosis outbreak in the early 1900s New York City school children attended open-air classes on rooftops, on an abandoned ferry, and in classrooms with the windows flung open in the dead of winter, the New York Times reported.

New York City Comptroller Scott Stringer wrote a New York Daily News op-ed stating that there are 29.5 million square foot of outdoor schoolyards in New York that could be repurposed as a class and programming space.

There’s a broad range in how people think about outdoor learning, according to Mirem Villamil, the head garden manager at Edible Schoolyard NYC, a nonprofit that partners with schools to offer gardening and cooking education to students.

“There’s a movement that includes school gardening, environmental education, physical education outdoors and sensory exploration,” Villamil said. “That’s one end of the spectrum. At the other end of the spectrum, there are people who are thinking of outdoor instruction as moving desks outside and setting them up under a tent,” she added.

“Every school is going to be different in what they can achieve and what is comfortable for their teachers,” Villamil said. “We probably can’t expect full-on environmental education on day one. That’s just not going to happen. But also can’t expect kids to be sitting at desks and gazing up at you the whole time either.”

According to de Blasio, school principals will determine how much learning to conduct outside in 2020. While some schools have schoolyards or other outdoor school property, for schools that don’t, the mayor said he would close off streets or make space available for schooling in local parks in certain cases. The city’s first focus will be on working with schools that don’t have their own outdoor space and ensuring that schools in the 27 neighborhoods hardest hit by COVID-19 illnesses and deaths get outside space first.

“Those neighborhoods have suffered so much,” de Blasio said. “We owe it to them to make sure they get every possible advantage going forward.”

The mayor’s surprise announcement on Monday came after a summer-long push from parents, teachers and principals for an outside option. That push, including a MoveOn petition, which garnered more than 4,400 signatures, involved asking the city for a system-wide process to request street closures near schools, park permits, central funding for professional development for teachers not used to outdoor learning, and equipment, like tents and foul weather gear. The hope was that a city-wide plan would go a long way to making access to outdoor spaces more equitable, according to Councilman Brad Lander.

In response to the COVID-19 pandemic, New York created an “open streets” program barring vehicle traffic on 100 miles of streets to give pedestrians more space. It also created an outdoor dining initiative for restaurants to apply for sidewalk seating that expanded onto roadways. The city’s response to the needs of schools took longer.

The delay in action irritated the teachers and principals’ unions, who felt they haven’t had sufficient time or guidance to plan for the upcoming school year, which is supposed to start on Sept. 10.

“We know that some schools that have abundant resources are already purchasing tents, negotiating outdoor space with elected officials, and raising significant amount of money to purchase PPE for staff and students,” Michael Mulgrew, president of the local teachers union, wrote in a letter to de Blasio, Chancellor Richard Carranza and Gov. Andrew Cuomo on Aug. 11. In addition to more spending power, schools in wealthier neighborhoods tend to be closer to parks, or to have green space or yards on school property.

“While we appreciate that school communities are actively seeking to solve these problems, we fear it will further the divide between the haves and have nots in our city,” the letter continued. “The COVID-19 funding provided to schools is completely inadequate to address the challenges we face. Our schools need immediate answers, a clear budget and the resources to move forward safely.”

“If a PTA has done their fundraising and they’ve raised more than enough for their school, let’s identify another school that doesn’t have that fundraising capacity,” Carranza said during the news conference.

Mark Treyger, chairman of City Council’s education committee, argued that offloading outdoor supplies funding onto PTAs would only deepen the divide between rich and poor schools. “Relying on PTA fundraising to fund this effort only exacerbates inequity,” Treyger wrote on Twitter.

“It is outright disrespectful to school communities who have been working around the clock and planning without adequate $ & time to keep finding information out like this,” he said of the mayor’s sudden outdoor education announcement.

Lydia Howrilka, a Brooklyn teacher and founding member of the UFT Solidarity Caucus, a group within the teachers union, said she was “deeply disappointed” by Carranza’s PTA funding suggestion, which she said disadvantaged schools without wealthy PTAs. “If he practiced what he preached and wanted to narrow the gap between rich and poor schools, the first step is fully funding schools, pushing the state to do the same, and not slashing school budgets,” she said.

“The idea of outdoor learning has real merit,” Mark Cannizzaro, president of the principals union, said in a statement, but noted that the plan itself lacked detail and raised “serious concerns around safety and security.” Principals would have been able to implement outdoor learning more effectively if de Blasio had given them enough time and support to do so, Cannizzaro said. Without funding, the plan will “exacerbate already existing disparities,” he added.

“As a result, we reiterate our call for a delay of in-person learning so that we can implement a safe and successful learning plan for our students.”

When asked, the Education Department did not provide an explanation to ABC News about why giving the go-ahead on outdoor learning took so long, and instead focused on the department’s quick timeline for responding to school plans for outdoor education.

“We developed a thoughtful, coordinated, safe approach to outdoor learning that will give school leaders an answer within a week,” Miranda Barbot, a spokesperson for the Education Department, said in a statement. “This plan gives school leaders what they asked for — flexibility, with a centralized and streamlined support structure that we are managing on their behalf.”

For the schools with existing programs, like the sites in East Harlem, Central Brooklyn and the South Bronx that partner with Edible Schoolyard NYC, incorporating outdoor instruction could be seamless. For many others, the change is more complicated.

“Parent and teacher groups are telling me that they had little to no input on the city’s return-to-school plans,” said David Kirkland, executive director of NYU’s Metropolitan Center for Research on Equity and The Transformation of Schools. “I fear rushing into this without further thought and input will backfire in ways that we can’t begin to imagine.”

Justin Krebs, a parent leader at an elementary school in Brooklyn and self-described enthusiast for outdoor learning, said he hoped that the city’s messy unveiling of the program won’t distract from the benefits outdoor schooling offers kids.

“Just because the rollout and announcement were unsatisfying and haphazard doesn’t mean it can’t turn around,” Krebs said. “Not as a panacea, but as one piece of the puzzle.”

Krebs acknowledged that de Blasio encouraging schools to seize the opportunity for outdoor learning quickly, while offering little guidance as to how to implement individual programs, would inevitably favor schools with robust resources. His school has already submitted its outdoor learning plan. Principals at less well-resourced schools are trying to figure out how to feed food-insecure students, secure laptops for kids who don’t have them, or staff up if they have an aging teacher base, he explained.

“A lot of underserved schools are going to have to skip it,” he added. “Even if they would benefit just as much.”

As an educator, Howrilka also worried about keeping her students safe in an outdoor environment.

“There was a shooting outside a block away from my school last fall,” Howrilka said. Clara Barton High School, where Howrilka teaches history, went into lockdown during the shooting, as did several surrounding schools. No one was hurt, but teachers and students were shaken by violence so close to campus. Howrilka also noted that cars have crashed into outdoor dining set ups in recent weeks. “If a crime or altercation were to happen close to where I am trying to hold my history classes, how can I protect my students and myself?” she asked.

She had additional concerns about keeping her teaching supplies out of the rain and about cold fall weather.

Liza Engelberg, the director of education at Edible Schoolyard NYC, said that she felt for teachers and principals trying to rapidly organize safe spaces and outdoor learning equipment. “It’s a lot for a school to have to figure out on top of everything else that they’re trying to figure out,” she said.

As for the weather, she thinks that if New York City schools have rain tents, they should be able to make it through Thanksgiving before they head indoors. “If you’re not getting rained on, you can handle a lot,” she said of the cold. Given what we know about coronavirus transmission inside, indoor spaces aren’t necessarily more comfortable for students or staff, she noted.

Engelberg hopes schools won’t get hung up on trying to overhaul their curriculum for the outdoors. “There are many ways to take kids outside,” she said. An outside learning plan could be as simple as having students read or eat lunch outdoors.

School principals have until Friday, Aug. 28, to submit their plans for outdoor learning to the Education Department.

What to know about the coronavirus:

Tune into ABC at 1 p.m. ET and ABC News Live at 4 p.m. ET every weekday for special coverage of the novel coronavirus with the full ABC News team, including the latest news, context and analysis.

Immigrants, They Get the Job Done

Mon Sep 28 , 2020
After a very long wait (only some of it due to the pandemic), Fargo is finally back. I reviewed the fourth season earlier this month, and I have specific thoughts on this week’s two episodes, “Welcome to the Alternate Economy” and “The Land of Taking and Killing,” coming up just […] 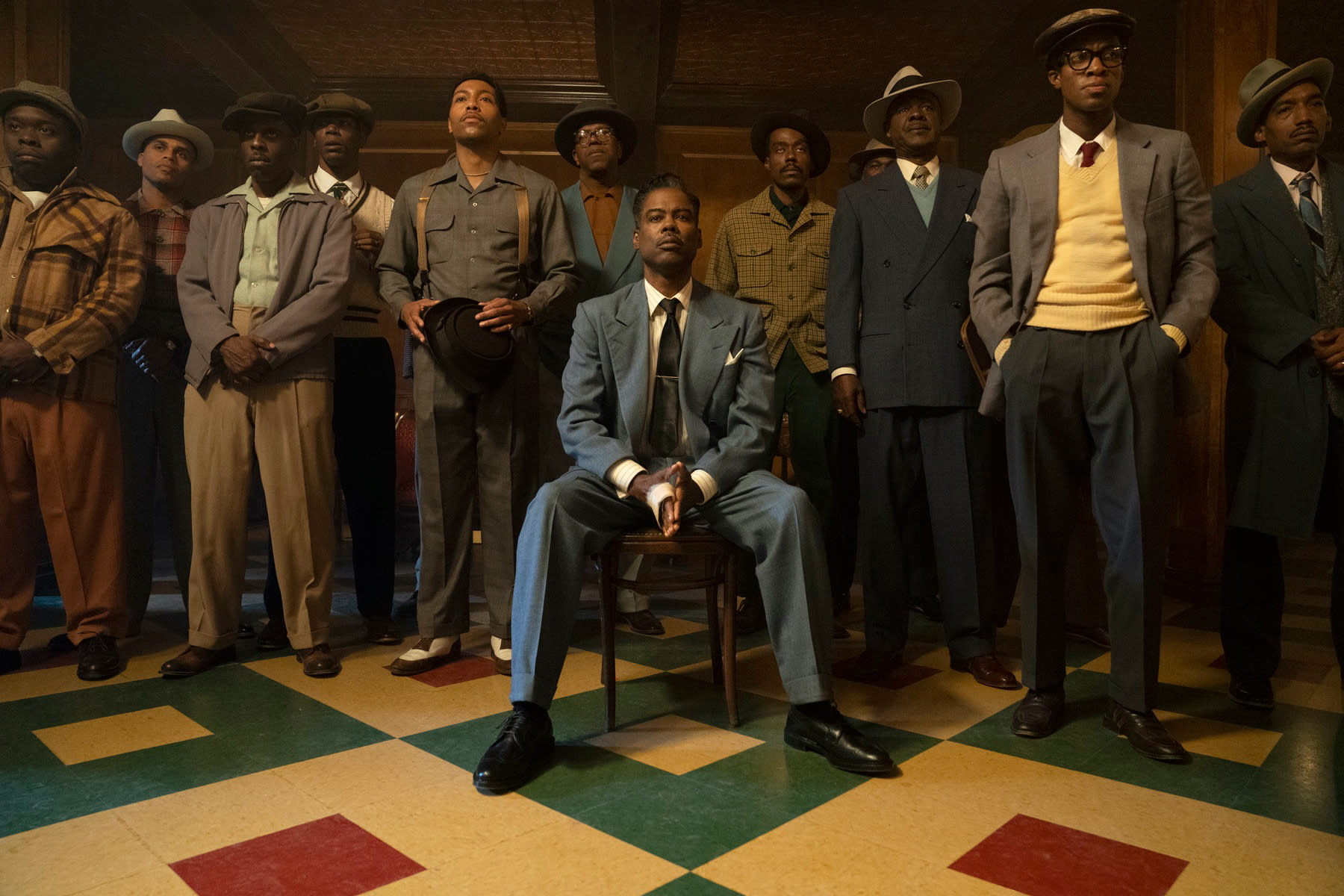