Opponents have raised more than $2 million to defeat a proposal to double San Francisco’s real estate transfer tax on sales of $10 million or more. It’s the biggest chunk of money spent on any San Francisco race this year, making Proposition I one of the most contentious local measures […]

Opponents have raised more than $2 million to defeat a proposal to double San Francisco’s real estate transfer tax on sales of $10 million or more. It’s the biggest chunk of money spent on any San Francisco race this year, making Proposition I one of the most contentious local measures on November’s ballot.

Voters likely will begin seeing an onslaught of mailers, door hangers, TV commercials and social media ads against the measure Thursday. It’s an all-out campaign largely organized by the San Francisco Chamber of Commerce — which often opposes new taxes — to defeat a measure that critics say will be passed through to some tenants and hurt housing production in the city by making development sites more costly to buy.

Supervisor Dean Preston, author of the measure, said the opposition campaign is “absurd,” and that the tax increase will hit only those who can afford it. He said the money will go toward critically needed affordable housing production and to those who can’t pay rent due to the coronavirus pandemic — though there’s no guarantee because the money will go to the general fund.

The donors to the opposition campaign are “a who’s who of big speculators from around the state,” he said. “I’m not surprised that they don’t want to pay their fair share in taxes.”

Donors include major developers like Equity Residential, Essex Property Trust and Kilroy Realty Corp., along with the California Association of Realtors.

The proposal, which must pass with a simple majority, comes amid great economic uncertainty for San Francisco, as the coronavirus continues to upend livelihoods and ravage the economy. According to the city assessor, real estate sales activity has fallen, which could diminish the tax’s potential revenue boost.

Ted Egan, the city’s chief economist, warned in a recent report that the tax would have a “negative impact” on San Francisco’s economy by discouraging property investment and increasing the cost of building new housing. The transfer tax is already a volatile revenue source for the city, and the tax increase, if approved, likely will cause it to fluctuate even more, according to the report.

“This is an economic disaster for the city,” Erickson said. “And when construction stops, it’s not Donald Trump that’s on the street and begging with a cup. It’s construction workers who are without jobs.”

Between 2010 and 2016, 51% of properties sold for more than $10 million were office buildings, followed by hotels at 16% and multi-family apartment buildings at 10%. Single-family homes make up a small fraction of such sales, at 3%.

The lower expected return coincides with a plunge in sales activity during the pandemic. A total of 83 San Francisco properties worth $2.5 million or more have sold for a combined $1.9 billion so far in 2020, according to Real Capital Analytics, a real estate data firm. For comparison, in the first three quarters of 2019, 172 properties worth $2.5 million or more sold for a combined $8 billion.

Two blockbuster deals agreed upon during the early stages of the pandemic — the sale of the Transamerica Pyramid and the sale of the partially built Oceanwide Center project — have yet to be completed, according to property records.

Carmen Chu, the city’s assessor-recorder, said the city is heavily dependent on large transactions over $10 million, and the tax would increase that dependency. In the past fiscal year, 1.7% of sales accounted for 67% of transfer tax revenue.

The city’s average monthly transfer tax revenue has dropped from $33 million in the spring to $12 million in the summer. It has shown signs of recovery, but the outlook remains uncertain, said Chu, who is neutral on the tax.

Jay Cheng, policy director for the Chamber of Commerce, said the tax could also trickle down to small businesses through tax pass-throughs, such as for retail tenants in large office buildings. He is also skeptical about where the money will be spent as the city faces a $1.5 billion deficit that requires a different ballot measure tax to be passed.

“You really think the revenue will actually be dedicated to affordable housing, or will it go to filling the deficit?” he said.

The Board of Supervisors passed a non-binding resolution this summer that said the money would go toward affordable housing and rent relief. Preston said the money will go into a fund, which the board plans to vote on next week to create. He said an oversight board will track how the money is spent.

“I don’t see any reason to think that the board would deviate from that when it comes to budget time,” Preston said.

Five seats are up for grabs in the November election, which means the board could look dramatically different in January from the one that voted on the resolution this summer.

Supporters say any money for 100% affordable housing is needed more than ever as the pandemic pushes more people toward poverty.

“It’s not guaranteed but it is an additional source that can make a difference,” said Norma Paz García, policy director for Mission Economic Development Agency, a nonprofit that builds affordable housing. “We have to look at the cumulative impact of this policy over time, and not just from one year to the next.”

García said she sees the personal impact that affordable housing can have on families and in a neighborhood. She pointed to two recently completed 100% affordable housing projects in the Mission, where people are going to be able to start moving in soon.

Peter Cohen, co-director of the Council of Community Housing Organizations, whose members are nonprofit housing developers, said it is important for those who can afford it to contribute to helping solve the city’s crippling housing crisis.

“When it comes to who is going to pony up money so we can have more affordable housing, everyone retreats to their own self-interests,” Cohen said. “It’s disappointing to see the level of opposition and hyperbole.”

The transfer tax is one of several measures on the November ballot that would target big businesses in the city, which include a tax on companies with highly paid CEOs. Mayor London Breed is frustrated at the number of taxes that the board placed on the ballot this year, arguing that competing taxes will diminish support for passing a business tax overhaul that she said is key for balancing the city’s $1.5 billion budget deficit.

“There are, unfortunately, a lot of measures on the ballot in San Francisco, and there is a concern that voters will be overwhelmed by the number of taxes they are being asked to support during an economic recession,” a spokesman said.

Home Improvement: What to do to prepare your garden for winter - Salisbury Post

Fri Oct 2 , 2020
Metro Creative Gardens provide an idyllic escape from the hustle and bustle of everyday life. In fact, many gardening enthusiasts typically cannot wait for the spring thaw so they can spend the next several months tending to their plants under the warm sun. But a gardener’s work is never truly […] 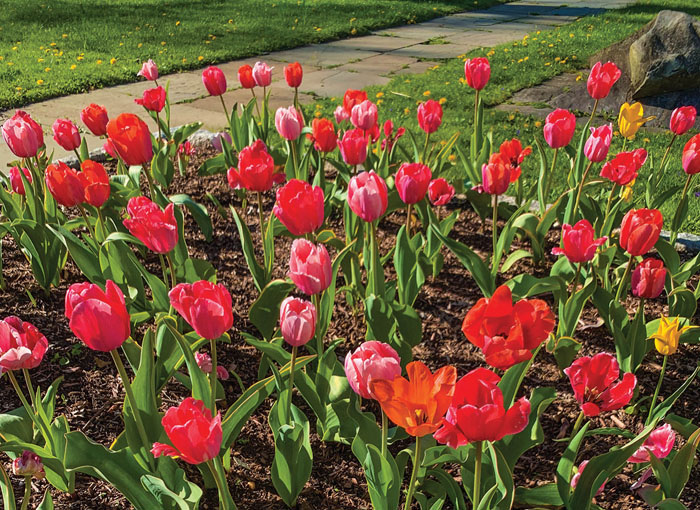