Ask chef Aaron London about the dishes he is planning to serve at his namesake restaurant, AL’s Place, upon its reopening for outdoor dining Thursday, is to hear true excitement. He’ll deep dive through the ingredients and preparation, explaining each one meticulously and tantalizingly as he picks his favorites on […]

Ask chef Aaron London about the dishes he is planning to serve at his namesake restaurant, AL’s Place, upon its reopening for outdoor dining Thursday, is to hear true excitement.

He’ll deep dive through the ingredients and preparation, explaining each one meticulously and tantalizingly as he picks his favorites on the retooled, seasonal menu — “The last thing I’ll say, last dish,” London promises, after having gone through three other items before launching into another explainer — and the excitement is catching. After weeks of closure due to shelter-in-place, and well, everything else that has come along with COVID-19 followed by months of to-go service, London is more than ready to get back into some semblance of normalcy.

“I’m excited about serving food to guests again,” London said by phone to SFGATE. “I think that’s a hugely important part of what we do in hospitality is: We make something delicious. We give it to somebody, we see their face light up — that’s really important for myself and for my team. I’m excited to plate food on a plate instead of a paper box. That is from the artistic side, that’s wonderfully exciting, the creative side. I’m excited to just feel that energy of being in a restaurant. It’s part of what got me into restaurants originally, right?”

AL’s Place is finally reopening for outdoor dining with eight (socially distanced) tables and shiny new plexiglass barriers as of Thursday. Although outdoor dining has been happening in various ways for months, London has only recently become comfortable with the idea of welcoming back customers. He has been focusing his efforts these last three weeks on designing and building a comfortable and safe outdoor space for customers and staff, with six new cabanas in the works to serve even more diners in the upcoming weeks.

But it wouldn’t be a reopening without a touch of nervousness. London is reopening his hit restaurant — which most notably earned Bon Appetit’s Best New Restaurant accolade in its opening year in 2015 — after months of a lack of normalcy and routine, plating everything into to-go boxes when he would have much rather be serving his creations on actual plates. When asked about his concerns or nervousness on reopening, London has plenty on his mind. There is, of course, first-day jitters, like it is for many restaurateurs on the apex of opening day, let alone one that comes after a closure forced by a pandemic.

“One would just be natural butterflies in the tummy before day one of opening,” London said. “No matter how much work and energy and thought we’ve been putting into making sure we’re ready for everything, it’s still like being at the top of the roller coaster ride. It’s like, OK, let’s f—ing go. I just want service to start already. So there’s some of that anticipation.”

But of course, now there are more concerns to worry about, including safety and the possibility of getting shut down again, say, should another wave of COVID happen.

“Nervousness — I think that’s indicative of the state of the world right now, nervousness is, you know, what’s gonna happen?” London said. “‘Are you going to keep people safe? Can we trust the clientele that they’re being vigilant and keeping their masks on and social distancing?’ So that’s a nervousness.

“And another one too, is, who knows if we’re just all going to get shut down again in a week?” London continued. “We’re spending thousands of dollars that I don’t have, that I’m taking out loans for to stand back up, to build new infrastructure and to put something in place. And I don’t know a week from now, [if] we’re just going to get shut down again. … I think that’s a nervousness everybody has right now.”

Despite the worries and butterflies, London is moving forward with outdoor dining because in his mind, the to-go boxes that have taken over his food for the past few months have been lacking. In prior years, AL’s Place has eschewed to-go boxes for customers because the food wouldn’t travel well, or wouldn’t translate at home, but the year of 2020 forced a change to all that. London pushed to translate all of his food for the to-go audience, to much acclaim — ”I’ve been obsessed with AL’s Place all through pandemic,” one friend confessed to me — but it took time to figure out a path.

“I decided the direction I wanted to take was, you know what, I’m still gonna make this AL’s Place food,” London said of the switch. “I’m just gonna make some tweaks to the components, [make] decisions on the plate and the portion sizes, et cetera, to try to make this feel as Al’s Place as possible, to feel as close to a family-style menu when you come into the restaurant — but still translate well for to-go.”

Although London is very much proud of the food he and his team has had to adapt for those cardboard contraptions, it took adjustments to his approach to food. Reconfiguring the menu meant having to make larger portions at lower prices than a dish would traditionally command at the restaurant — “things look really small in a cardboard box,” London noted — along with a change in thinking of how to approach each dish.

“We had to really put thought [into things] when I was making a dish. It couldn’t just be like, ‘Ooh, yum, what do I want on the plate?’” London recalled. “It was, ‘Yum, What do I want to plate?’ And then it was next, ‘OK, well, what kind of containers am I going to put those in? And how am I going to be able to put that in a box together so it travels well, that makes sense for the guest? How are they going to take it out and reheat it and plate it?’ And we created elaborate instructions for every dish, so people would know what to do with it.”

To-go launched with London, his GM and a team of sous chefs, a downturn from its usual staff of 32. London now has a staff of 18 to gear up for the patio reopening, assured that their lean group feels safe in reopening after meetings over whether to do outdoor dining, talking through the steps that they’re taking to keep them and the guests safe. Beyond the necessary safety precautions that London and his team have meticulously researched and implemented, the group has rethought service for the front of house, looking to maintain a balance of safety with the hospitality that, well, makes up the hospitality industry.

“We just went through every possible step [of service] and we created two options for every step,” London said. “And one option would be, maybe, lowered hospitality and one option, wouldn’t. And so then we kept a running kind of a hospitality list so we can look at it as a whole, because it’s a little bit of tunnel vision to be like, ‘OK, well, do we want the guests to pour their own wine, or do we want to pour their wine if it’s bought by the bottle but not by the glass, et cetera.’ And if you’re looking at it micro like that, it’s a little bit hard to make an organic decision.

“So we kind of tried to go through it and be choosy so that we could retain as many steps that are hospitality-related as possible, while at the same time limiting the amount of interaction with the table as much as possible, which are, two big opposites,” London said. “Hospitality is touching the table. And so it was kind of like, how do you attain a semblance of hospitality while still lowering the amount of interactions where the server is within the physical bubble of the guest. So a lot has gone into that. I’m really proud of what we’ve created — I think we’ve created a great new playbook.”

London and his team have struck that balance, as far as he is concerned, and the excitement is palpable. AL’s Place is ready to welcome back guests — and maybe, just maybe, sneak a glance at patrons enjoying the food — and give them all a bit of respite from the world.

“The idea hopefully, with guests going back out to restaurants is, maybe for a moment they can sit down and eat some good food and forget for a moment how f—ed up everything is everywhere,” London said with a laugh.

Looking for descriptions of the food from chef Aaron London? We’ve added some of his comments to photos of the dishes throughout the story and the slideshow above.

AL’s Place, located at 1499 Valencia St. in San Francisco, is open for outdoor starting Thursday, Sept. 24. Its hours of operation are Thursday – Sunday, 5:30 – 10 p.m. Reservations are strongly suggested and are available at Resy here.

Fri Sep 25 , 2020
Similar to social zones in Grand Rapids, alcohol can be carried and consumed outdoors in the designated spaces. MUSKEGON, Mich. — Unruly Brewing Company owner Jeff Jacobson has had a rough time financially during the pandemic, particularly because one of his brewery’s biggest draws is live music. “A music venue […] 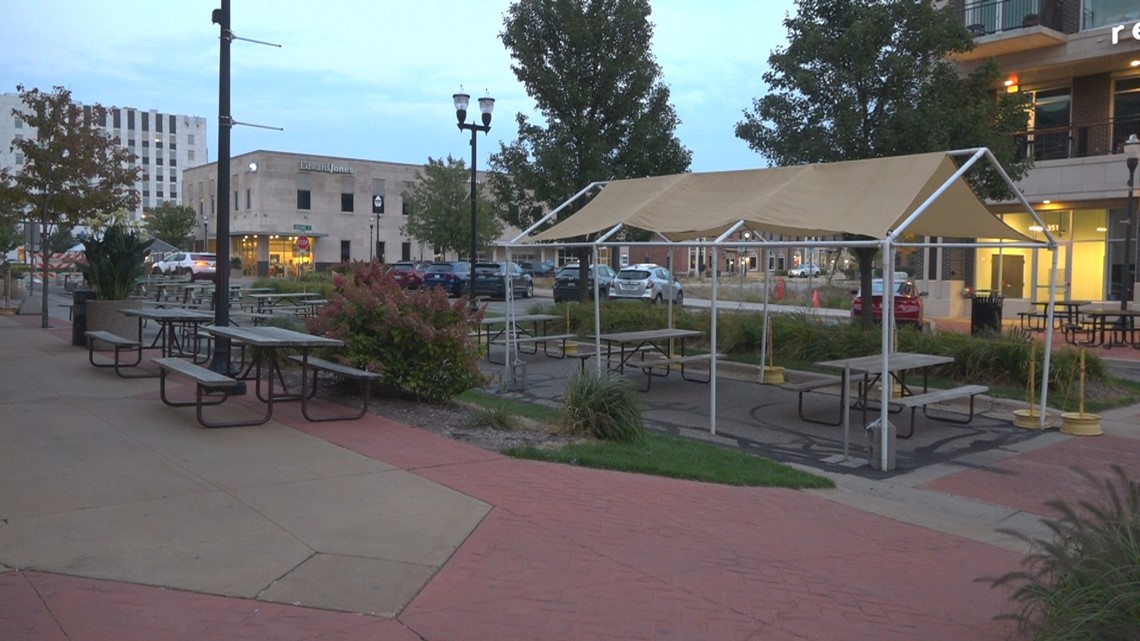