I think chefs are also rethinking what their role is and thinking of themselves as teachers, as much that what they want to do is be mentors to the next generation, which is a very different way… We’re looking at chefs who have been wildly abusive. I mean, if you […]

I think chefs are also rethinking what their role is and thinking of themselves as teachers, as much that what they want to do is be mentors to the next generation, which is a very different way… We’re looking at chefs who have been wildly abusive. I mean, if you read Bill Buford’s new book, Dirt, which is wonderful, but he went and spent five years working in a very high-end kitchen in France, and the abuse is unbelievable. And that’s sort of what’s been accepted in the restaurant world. I don’t think that’s going to fly anymore after this. I mean, the conjunction of all of these moments, and everybody’s introspection is going to mean that kitchens are going to be very different places, and I think restaurants are going to be happier places.

LA: Another big topic of conversation in the food world this summer, as well as the future of restaurants and what that looks like has been cultural appropriation in food media. How has it impacted the way you’re thinking about food writing and your own cooking? And also, how do you think these conversations will change the way that we find inspiration in food when we’re traveling, and bring back those ideas and those recipes?

RR: Well, I mean, it’s been a fascinating conversation. Look, we’re all white, right now, here. And there’s no question that when you have a media that’s one color, it privileges that particular kind of food.

I judged, actually for Condé Nast Traveller India, last year, I judged a food writing contest and I was stunned by how little I knew about Indian food. And I thought I knew a fair amount about Indian food, but I was stunned reading these articles and cookbooks about how unbelievably ignorant I am. That was really eye-opening for me. Now, as I read more and more about the food that has just been under-reported in this country, it’s a really fascinating conversation.

I think we’re going to start seeing cookbooks coming out about food … Most of Africa is unfamiliar to most Americans. It’s a giant continent with a huge diversity of food with very sophisticated food. There’s so much of the world that we know very little about, and it’s all waiting there for us and we’re going to get it. It’s thrilling. It’s really thrilling.

MC: I want to shout out one cookbook from Hawa Hassan who is coming out with a cookbook called In Bibi’s Kitchen. She’s Somali and she is putting out a cookbook about eight African countries that all touch the Indian Ocean. She is such a great follow on Instagram. I cannot wait to read her cookbook and hopefully cook and learn. The photography looks absolutely stunning. Next up on the to-buy list.

When you think of it from the traveler’s perspective, how do you think we’re going to change the way we travel for food? Because I think the three of us, probably you more than Lale and I, but the three of us definitely integrate traveling specifically for restaurants, for dishes, into the way that we move around. How do you think that’s going to play out?

RR: I think people are going to be more adventurous. I mean, I think, after a year of everybody eating their own cooking, people who could have looked at things like, “Ooh, I wouldn’t eat that” are saying, “Give me that. I’m hungry for new tastes.” I really think we’re all going to be very excited about going out and tasting new things. And I think we’re going to have a generation of children who are cooking with their moms, maybe for the first time in their lives. You know what I mean? I mean, I know when my son was young, when I couldn’t figure out what to do with him, we went into the kitchen. And I’m sure that’s what’s happening now with people with young children. You go in and you mix up a batch of bread and it’s like, “Oh, it’s rising.” And so, I think we’re going to have a generation of young children who sort of understand food in a way that previous generations didn’t, are eager to try new things. I hope so.

WeWork Bets On Outdoor Spaces For The COVID Era

Mon Sep 28 , 2020
WeWork Viewpoint Seattle WeWork Until there is a vaccine or treatment for COVID, working inside with a large group of people is too great a risk for many. But WeWork, which has had more than its share of growing pains in recent years, may have a solution or at least […] 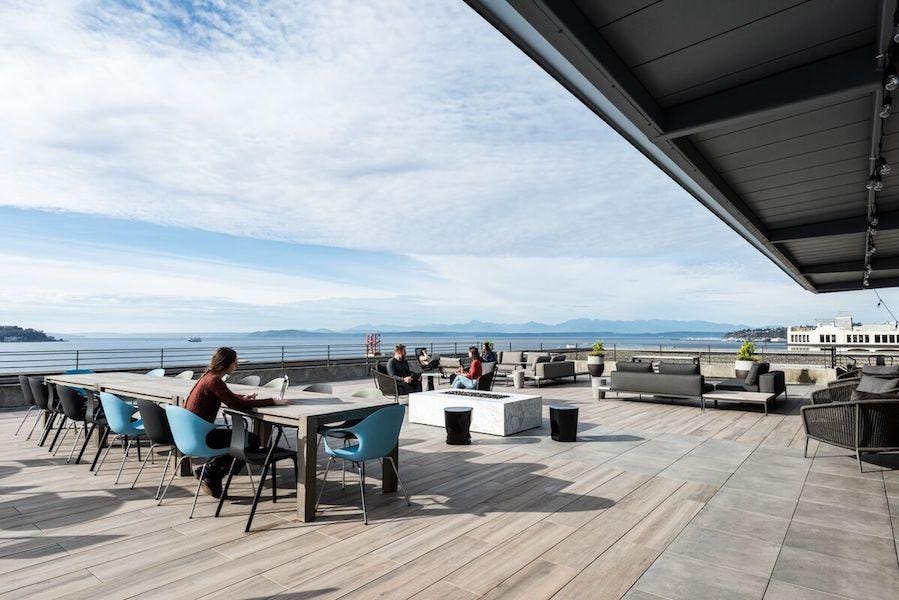