WASHINGTON, DC — On Saturday, President Donald Trump is planning to hold his first in-person event since testing positive for the coronavirus. Two weeks after the Rose Garden event that is now considered a “superspreader,” Trump is planning to convene another large crowd outside the White House for an event […]

WASHINGTON, DC — On Saturday, President Donald Trump is planning to hold his first in-person event since testing positive for the coronavirus.

Two weeks after the Rose Garden event that is now considered a “superspreader,” Trump is planning to convene another large crowd outside the White House for an event on “law and order.” That’s despite the ongoing White House Covid-19 outbreak.

The event will feature “remarks to peaceful protesters for law and order” by the president, according to an invite obtained by ABC News and confirmed by White House sources familiar with the planning.

The gathering is scheduled to take place on the South Lawn of the White House in conjunction with a previously planned event organized by controversial conservative activist Candace Owens’ group Blexit, a campaign to urge Black Americans to leave the Democratic Party, sources said.

Trump is expected to address the crowd of hundreds of people from the balcony of the White House.

With just days separating the president from his stay at Walter Reed Medical Center, experts fear this type of event threatens to exacerbate the crisis already engulfing the White House and further spread the disease. On Wednesday, ABC News reported that the coronavirus outbreak had infected “34 White House staffers and other contacts” in recent days, citing an internal government memo.

“The Trump administration continues to have disregard for the science,” said Dr. Jay Bhatt, an ABC News contributor and practicing internist. “This statement is premature given that we don’t know what will happen between now and Saturday given that symptoms can pop at any time. He put many people at risk and we saw the aftermath. This can’t happen again.”

Dr. Sean Conley, the president’s personal physician, said in a Thursday night press release that “Saturday will be day 10 since [Trump’s] Thursday diagnosis” and opened the door to Trump hosting public events again after they were canceled following his diagnosis.

“Based on the trajectory of advanced diagnostics the team has been conducting,” Conley continued, “I fully anticipate the president’s safe return to public engagements at that time.”

The White House and Conley have faced criticism for deliberately misleading the American people, offering conflicting statements about the president’s health status and treatment timeline after he tested positive — leading to a crisis of credibility regarding those tasked with informing the public on the president’s health.

News of the event — and the number of expected attendees — is sure to reignite concerns that the White House has not taken the steps necessary to stem the disease’s spread.

Dr. John Brownstein, a Harvard epidemiologist and ABC News contributor, said that “while the president continues to show improvements, we must remain vigilant about his health.”

“We know that this illness can take unexpected sharp turn and providing such a positive forecast may only provide a false sense of security,” Brownstein said.

Numerous attendees of a Rose Garden ceremony to name Amy Coney Barrett as the next U.S. Supreme Court nominee two weeks ago have since tested positive – including the president, who was being treated at Walter Reed Medical Center last weekend.

Sat Oct 10 , 2020
Technavio has been monitoring the outdoor apparel market and it is poised to grow by USD 3.90 bn during 2020-2024, progressing at a CAGR of over 5% during the forecast period. The report offers an up-to-date analysis regarding the current market scenario, latest trends and drivers, and the overall market […] 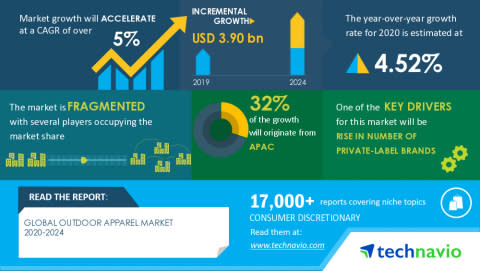