Management has de-risked its portfolio by transitioning to lower-cap rate, lower-risk, and higher-growth suburban multifamily properties. Capital recycling from high-cap rate to lower-cap rate properties has resulted in a short-term decrease in core funds from operations per share and an underperforming stock price. However, the company is well-positioned for the long term with a suburban multifamily focus.

The sector and market focus position the company to benefit from population and employment migration to the region, as well as a continued housing shortage. WashREIT is undervalued due to its diversified nature and recent core FFO per share declines. Suburban office is stable, and retail makes a small portion of the total NOI for the company. WashREIT is a value at current prices given its relatively low valuation and growth prospects.

Since CEO Paul McDermott joined in 2013, the company has made significant strides to simplify its focus. By reducing its exposure to retail and office, WashREIT has increased its multifamily exposure from 19% to 48% of its total portfolio.

Given that multifamily properties sell for much lower cap rates than office and retail, this strategy has been dilutive for WashREIT on an FFO per share basis. While the company generated $1.70 in FFO per share in 2013, this number dropped to $.77 per share through Q2 2020 ($1.54 per share annualized).

However, FFO per share is a poor cash flow metric for REITs with retail and office properties. Leasing commissions and tenant improvements are necessary expenditures to maintain such properties and accommodate for new tenants. However, they do not consist of a major expenditure for multifamily properties. Consequently, core funds available for distribution (FAD) per share have increased at a steady rate as multifamily exposure has increased.

While FAD per share was $1.27 in 2013, this figure increased to $1.50 per share annualized for 2020. Such is a result of reduced exposure to office and retail, as well as more efficient use of tenant improvement expenditures.

One of the great concerns among many investors is how primary markets, like DC, will respond post COVID-19. Big, densely populated cities have been most affected by lockdowns and economic recession. I talked about this a lot in a recent article on why I believed primary markets were poor investment options right now. However, I would not put Washington DC, and therefore WashREIT, in the same category as New York City, Los Angeles, Boston, or Chicago.

For one, DC is in a much better economic situation than them right now. As the chart above demonstrates, DC has a much lower unemployment rate than each of its large metro peers.

(Source: Bureau of Labor and Statistics)

DC’s low unemployment rate can be attributed to the metro’s stability. The federal government is the largest employer in DC, and it is also the sector that has been least impacted by the recession. The federal sector has been the only one in the DC region not to experience job losses.

Recent reports have labeled DC as one of the cities best positioned to recover post COVID-19. Its high levels of educational attainment and diversified economy offset concerns over the metro’s higher population density. 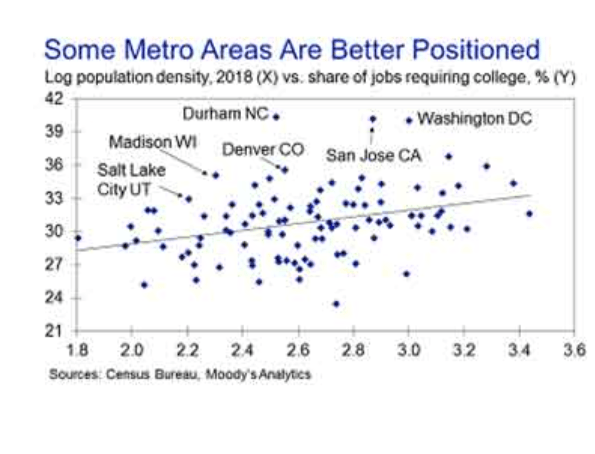 From a real estate perspective, the metro area is expected to experience elevated population growth over the next five years, and renting maintains a much more attractive option to home ownership given the low rent/cost of home ownership ratio. Northern Virginia, where WashREIT’s portfolio is most concentrated, is expected to experience a reduction in supply in the coming years as well.

Employment growth potential exists as well, as Amazon (AMZN) remains committed to creating up to 25,000 jobs in the region with its HQ2 expansion in Arlington, Virginia. The company just hired its 1,000th employee there. Amazon’s 2.1 million square foot space is expected to be completed by 2023 and will house nearly half of the 25,000 employees.

WashREIT will be a big beneficiary of Amazon’s growing presence in the DC metro. Management stated on its most recent conference call that, “Over 90% of our Class A and Class B urban infill assets are located within a mile of the Metro and over 75% are located within a five mile radius of HQ2.”

Many other big tech companies are following Amazon’s footsteps by expanding into the region. Microsoft (MSFT) and Walmart Labs (WMT) also recently signed big leases in the northern Virginia market. According to CBRE, office leasing has declined just 12% in the second quarter, compared to the trailing 5-year average.

On its Q1 conference call, management mentioned they have signed LOIs for 3% additional occupancy in their office properties. The office portfolio has experienced a decline in occupancy over the last couple years due to high-profile move-outs. And concerning trends have been taking place in the DC office market with the spike in vacancy that has occurred post COVID-19.

However, these new commencements will drive significant revenue gains once employees begin returning to work. The average lease term of the company’s office portfolio is 80 months, representing a fairly long lease duration period. Any potential buyers in the office market will greatly value stable, reliable rents. Long lease durations and high rental collection rates are indicative of stability that will be very attractive when transactions become more active.

WashREIT’s portfolio is highly suburban, particularly its multifamily assets. Just over 30% of the company’s portfolio is exposed to urban DC, while the remaining 63% is concentrated in predominantly the northern Virginia suburbs, and a small 6% in Maryland suburbs. Much of WashREIT’s 30% exposure to DC is in its office portfolio, as the company owns just a few downtown DC multifamily apartments.

One of the key themes of post-COVID-19 trends has been the divergence in multifamily performance based on geographic location. The suburbs (low population density) have way outperformed urban portfolios (high population density).

As the chart above demonstrates, REITs with suburban portfolios have dominated urban portfolio REITs. The flight to the suburbs is in its early innings. Between the desire for more space and millennial movement out of cities, the suburbs are set for a strong rebound in the coming years. I would much rather be a REIT positioned in markets set for population in-migration.

Assuming 3 people per household, the company’s multifamily portfolio is in zip codes averaging around 2,000 households per square mile. This is a little higher than its suburban multifamily peer REITs, like Mid-America Apartment Communities (MAA), Independence Realty Trust (IRT), or Investors Real Estate Trust (IRET). However, these REITs are also concentrated in the Midwest and Sunbelt suburbs. WashREIT’s mid-Atlantic, DC metro focus will inevitably expose it to more densely populated suburbs.

WashREIT’s population density is well below that of primary market REITs AvalonBay Communities (AVB), Equity Residential (EQR), or Essex Property Trust (ESS). WashREIT’s performance has been much more consistent with the Sunbelt and Midwest suburban-focused REITs than urban-focused REITs for the second quarter as well.

In addition to having a suburban focus, WashREIT is also heavily concentrated in Class B multifamily properties. One of the strengths of this area is the large delta between rental rates for Class B and Class A properties in the DC Metro area.

In its Q1 2020 conference call, management noted that Class A units were priced at a 23% premium to Class B in the DC metro area and a premium of up to 30% in WashREIT’s submarkets. The Class B stock owned by WashREIT is much more affordable than Class A.

Additionally, WashREIT has strongly focused on redevelopment and renovation for its multifamily assets. The company recently suspended its renovations due to COVID-19 and poor market conditions. But over 3,000 units, representing around 40% of the company’s multifamily portfolio, remain in the pipeline to be renovated over the next five years. These renovations are expected to achieve mid-teens returns on investment, fueling NAV and earnings growth.

Ground-up developments at two properties are also underway or set to initiate in 2021, creating more avenues for growth potential over the next several years. The strategy of renovating Class B apartments and hiking rents has worked phenomenally for WashREIT’s multifamily REIT peers, like NexPoint Residential Trust (NXRT). The company has seen superior earnings growth and stock price performance.

WashREIT’s annualized Q2 core FFO per share figure is $1.52. Annualized FAD is $1.50 per share, though this may be a little inflated due to reduced recurring capex, tenant improvements, and leasing for Q2.

WashREIT’s multiple remains just over 13 for its current stock price. Given its mixed exposure between office and multifamily, the current multiple does not represent a massive bargain relative to its peers. Most office REITs are trading around 10-12 multiple, while multifamily are 16-20.

Thus, they are a little below average, demonstrating some multiple expansion potential. Management has long stated that Q1 2020 would be the company’s bottom in terms of FFO per share. This is mostly attributed to move-outs in its office portfolio, and strong leasing is expected in 2021 to bring occupancy levels back up.

Combining this with the strong demand drivers in multifamily, I think earnings growth potential exists for WashREIT over the next few years. Unlike some of its multifamily REIT peers, WashREIT is also has much lower debt loads. Net debt-to-EBITDA was 6.1 at the end of Q2, at the low end of its target 6-6.5 range.

As performance continues to hold up strong amid the recession and subsequent recovery, I expect this gap to close. It is much higher than that of its peer multifamily REITs. IRET, NXRT, and MAA are trading fairly close to NAV at this point.

I like WashREIT stock at current prices a lot. The market is undervaluing it due to its diversified nature, and management’s prudent capital recycling in suburban multifamily and redevelopments will fuel long-term earnings growth. The DC market is strong and is poised to recover and rebound from the recession well.

However, the company’s positive attributes can also be a detriment, should conditions change. If the DC market struggles or hits a downturn due to localized issues, WashREIT will be massively impacted. It is probably the least geographically diverse publicly traded REIT in the United States, given its sole focus is the DC metro. More concerning could be the potential that office and retail fail to rebound sufficiently from COVID-19. If such happens, the company may be forced to sell at much lower prices than anticipated, fueling further dilution in its transition to multifamily.

It would have been much more beneficial had the company been more concentrated in multifamily at this point, as its outlook has much less uncertainty than retail and the office sector.

WashREIT is a great risk-reward play at current prices. Portfolio stability has been demonstrated through its high rental collections. Growth initiatives are in the pipeline with upcoming renovations to multifamily properties. The company’s low earnings multiple and discount to NAV reflect a lot of the damage from COVID-19 is already priced into the stock. The stock price is currently just above post-COVID-19 lows, and I anticipate a solid recovery as the DC economy continues to come back strong. A stock price closer to $25 per share seems much more appropriate, as it would bring the company’s multiple and P/NAV much more in line with that of its peer multifamily REITs. With low leverage levels and a well-covered 5.9% yield, WashREIT is a solid buy.

Disclosure: I am/we are long WRE. I wrote this article myself, and it expresses my own opinions. I am not receiving compensation for it (other than from Seeking Alpha). I have no business relationship with any company whose stock is mentioned in this article.